A Brief History of our Parish 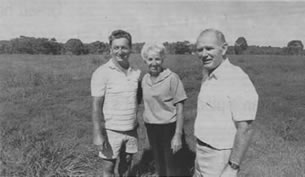 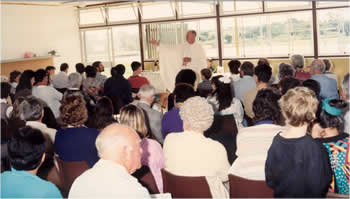 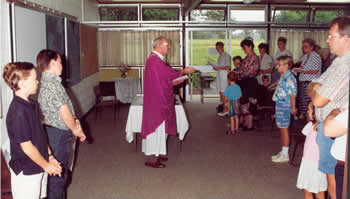 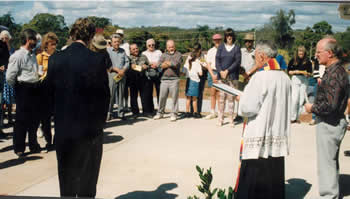 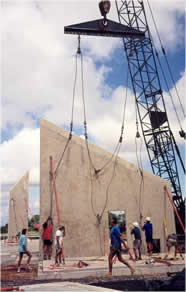 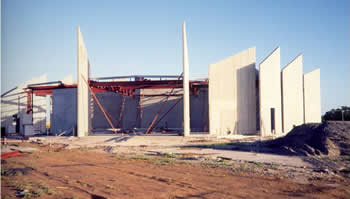 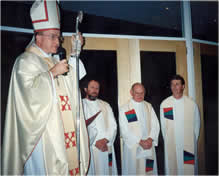 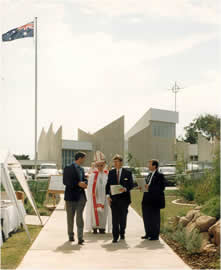 Click on the images above for captions and larger versions of the photos
‘Day and night (Lord), let your eyes watch over this house, over this place in which you have promised to make a home for your name”
​2 Chron. 6: 20.
This is the prayer Solomon prayed concerning the temple, which the people had built for their God. This could surely have  been the prayer that the catholics of Birkdale made to their God as the first steps were taken to build their parish church. In January 1988,  five hectares of gladioli-strewn vacant land and a rented house were purchased by the Archdiocese of Brisbane from  Ray and Lina Bandiera.  This land was situated on the corner of Birdwood Rd. and Haig St., Birkdale.​

On the 1st October, 1991, the Council of Priests voted in favour of a new Parish at Birkdale to commence at the beginning of 1992,  This parish was  to be formed from the existing parish of St. Anthony’s, Alexandra Hills. On 8th March, 1992, it was formally launched with a mass at St. Anthony’s, which was celebrated by Fr. Paul Rooney, St. Anthony’s, Fr. Charles Tomasi, (retired) and Fr. Joe McGeehan, the first Parish Priest. Prior to this, Mass had been celebrated in the area  monthly by Fr. Tomasi at the Wellington Point State High School.

On 15th  March 1992, the parish’s first weekly Sunday Mass was celebrated at the Wellington Point High School. The parish consists of Wellington Point and Thorneside, which were old established suburbs, and Birkdale where there was development taking place as the original farms were being divided up. 1990 figures showed that 25% of the population of the area was 15 years or younger. Catholic Leader March 15 1992

In July 1992, Fr. Joe McGeehan was transferred to the Gympie parish and Fr. Luke Reed was appointed as Parish Priest on 31st August.  The Ursuline sisters followed in April 1993. They became involved in Faith Formation, Sacramental Preparation, R.C.I.A., Music Ministry and Pastoral visitation.
In December 1994 the Parish received provisional approval from the Federal Government for the establishment of a Preschool and a Year 1-7 Primary School on 3.6 hectares of the Church's Birkdale site.

On 31st March 1995, the new Church was opened and dedicated by Archbishop Bathersby. The church is Australia’s first Mary Mackillop church to be built since her beatification by Pope John Paul II in Sydney in March of that year. The church was built to have an Australian look, with the corrugated effect on the concrete, reminiscent of the farm sheds originally on the site. And because of its closeness to Moreton Bay, the tilt-up concrete was fashioned to look like sails.

Click here for detailed information about the construction and furnishing of the Church, as reported by Tom Elich in Liturgy News in December 1995.
The Architect, Roger Heathwood of Heathwood Cardillo Wilson at Wynnum, said the building committee had specified an inexpensive “honest” construction. Courier Mail June 8th, 1995.

In April 1995, the grounds were landscaped, incorporating dense stands of forest sheoakes planted in lines to form a cross.

On Sunday, April 20, 1997,  the Parish School was blessed and opened by Archbishop Bathersby. Bernard Holland was appointed the first Principal.

In July 1997, parishioners held a farewell picnic for Father Luke to celebrate his time in the parish and to bid him well for the future.

On 20th July 1997, Fr. Ian Wren was appointed the new pastor. Fr Ian is fondly remembered for his gentle leadership, hard work and his sincere pastoral care of the community.

On 1st February, 2004 , Fr. Ian celebrated Eucharist for the last time in the parish. There was a function  to farewell him on the Saturday after he had spent over six years in the parish.

On 13th March, Fr. Murray Moffat was appointed Parish Priest. He was given a great welcome by the parishioners.

On 8th July, as part of the 10th anniversary celebrations, the Garden of Reflection in memory of a Benefactor, Jessie McGregor, was dedicated and blessed. The committee worked hard over several weeks planning the gardens and then landscaping them. The Stations of the Cross form a large part of the gardens.

After years of using the church as a multi-purpose building, all were thrilled to finally see the new Parish Centre completed. Congratulations to the hard-working committee who planned and designed the building. It and the Administration Block were officially opened and blessed. Now the priests were able to garage their cars in the Presbytery.

After Fr. Murray Moffat's time, the parish welcomed Fr. Dave O’Connor as Parish Administrator for the short term. On the 8th August we celebrated Mass for the 100th Anniversary of the death of Mary MacKillop with Bishop Joe Oudemann.

Fr. Anthony Mellor began his time as pastor on 1st September, 2009. He came just in time to celebrate news of Mary Mackillop’s canonisation and the parish moved into celebrating this by a number of activities. There was the wine and cheese evening with specially labelled wines on sale; a talk by the Josephite Sister, Monica Cavanagh; a retreat day at the Santa Teresa Retreat Centre, led by Sr. Monica; a Feast Day Festival on August 8, an Art Show in September and to cap it all a Pilgrimage to Rome for the canonization on October 17, 2010.

And now as St. Mary MacKillop Parish, Birkdale, the story continues...........
Our Pilgrims and Parish Community Members share memories of Mary MacKillop's Canonisation in Rome
Click on the links below to read the reflections and check out the photos of Canonisation celebrations..... 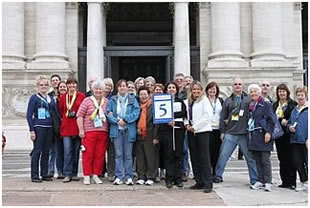 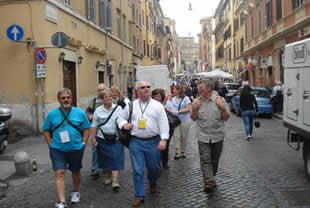 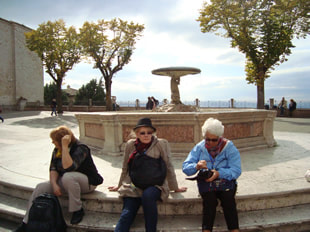 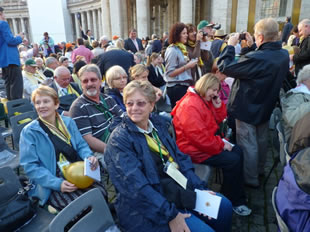